I touched upon this on this previous post but i wanted to break it down. I’m pleased with the streamlined process. There’s some info I have to share beforehand which is that I usually don’t take more than 3 seconds with each card and only one format works for me and I know this from my experience with learning Japanese (It’s just my personality and I can’t get myself to read each card thoroughly and slowly… as soon as the answer pops in my head I press the space bar and give my answer). If you take more than 5 seconds with each anki card you should really reevaluate what you’re doing. As amazing as Anki is with the spaced repetition, if you use it wrong you are wasting your time and in the worse case scenario you’re deluded into thinking that you’re kicking ass in x language when you are wasting time. 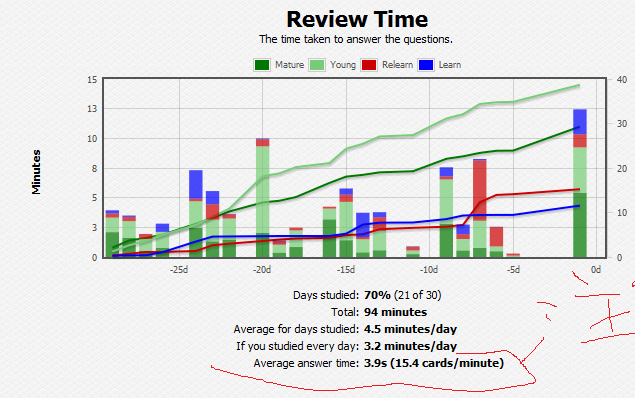 (yes it says 3.9 secs but I’m still converting the format over for old cards that are still the traditional format of word in front and definition in front. I think that’s why my answering time is longer than it is because like I said it’s in my personality to press that space bar ASAP)

Another thing I have to mention is that I am only able to do this mcd format because of my current level of familiarity of Korean and my current korean vocabulary. I had mentioned in that previous post that I recently started this format because I finally reached a point where I passed this vocab level/korean familarity threshold where I am actually able to engage with the MCD card format and doing those cards are virtually effortless. Well more like really easy. AND another thing I HATE IT when people write stuff off without thinking about the possibilities!! in a previous post I mentioned how people think TV is a waste of time blahblah blh but that i disagreed because ultimately it came down to the TV show because there are really well-written, well-produced shows with words I gotta look up words in the dictionary if I want to understand them in their entirety. Anki gets a bad rep too because people don’t realize the possibilities like the different formats of cards you could set up in anki. for me this format has been soooo good for my Japanese and now my Korean. Of course I am using anki properly as in supplementing my learning from Native Media as opposed to putting all my time and energy into anki. There is an ideal ratio of how much time you spend with anki vs your language and my personal belief is that in the beginning you should especially spend more time with the language and native media etc rather than anki. For Korean, in the beginning when I added cards in the traditional format of word or sentence in front and definition in back I could tell from doing the reviews that this shit wasn’t happening because anki does not replace actually spending time with the language. also I think in the beginning certain words are just easier to remember than others just because certain words are that much more common and useful and it’s overwhelming in the beginning with all the Kango. So even though I was adding these cards and knew I wasn’t actually retaining most of it I still did the anki reviews but I didn’t take it seriously. I would half-ass it and put as little effort into it as possible and I would mark GOOD instead of AGAIN when I had no f’in idea what the answer was because I knew there was no point drilling this in anki till i “know” it because that shit will not happen. ANd now in 2016 I get to convert those cards into mcd format and actually learn them and actually engage with anki.

I was going to leave the deck I originally shared on anki and then share my mcd format deck but anki just ended up over-writing the original deck so… that’s unfortunate.

SO WITHOUT FURTHER ADO here is an example of the streamlined anki process!!

step 1) Watch a korean tv show that I will actually enjoy and gain something from. It’s truly amazing all the different information and stories I hear from watching korean tv and japanese tv that i would never get from american tv and vice versa. it’s enriching and I love it.

this episode features CHEETAH who was a fierce and talented rapper from unpretty rapstar season 1 . sometimes I torrent the episode of the tv show but for this particular show there’s no torrent for it. I enjoyed listening to alllll the guests in the episode in the end ! Another show i REcently did was 이몽사몽 episode where the girl was saying that her mom was a video game addict. I wanted to watch this episode because it sounded mad interesting.

step 2) I use my iphone and search for unknown words in my korean-japansee dictinoary while watching the show. I IGNORE any words that plop on the screen that are not words that came out people’s mouths like sound effects or describing crap. Sometimes I do get tempted to look up and add background korean text IF it looks like it’ll be really easy to remember like no bacchim. Usually they “sub” the dialogue so I can usually look up the word. If I find the correct definition i copy it and paste it into my notepad in my iphone. so while I do this I usually rewind the show 15 seconds using the left arrow (whether it’s the .mp4 playing or this website) or I just let the show play and rewind back to the spot after I’m doing looking up the word.

step 3) email that sucker to myself

step 4) format the shit out of that in notepad using html and also adding the tag and using control + h to mass delete crap. and of course I delete any words that I don’t think are worth adding whether it’s too easy or useless etc.

one of the reasons this format works so well for me is that i am very familiar with Japanese so reading in Japanese is automatic as it is with english but i think it’s moreso with Japanese due to the Kanji and visual aspect of the written language.

as far as i know this is the most efficient way to go on about it and I got over 20 cards from this episode. I love living in 2016 with all these technology and time-saving tools.

by the way the oldest card in my korean anki deck is from 2012 01 22 which means I’ve been neglecting this anki deck for like 5 years before i truly started to engage with it~~ also I had started learning korean in 2011 summer but did manual srs because I knew the words i would learn would be common and useful and not worth anking and so my deck does not start from beginner/easy af. I loved how I had the clarity to know that that was the right way to go. it’s just not worth anking in the beginning of language learning imo except for like remembering the kanji.

here are more interesting talk/variety shows where people talk about interesting stuff!!! i don’t watch kdramas because  i hate the way talk…  i like the way real people talk . k-wave is super helpful to korean content consumers since they upload on youtube

omg they added k-subs to the ancient strong heart eps! there’s 12 languages including japanese. wtff i wish i had it in 2012

2 thoughts on “How I learn Korean with Anki”